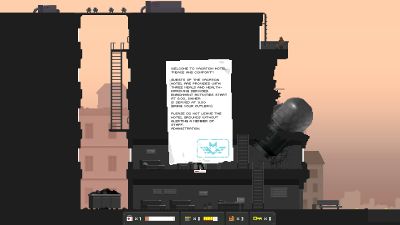 The Capsules are the principle attack vectors of the First and Second Visitation.

The capsules are large, pill-shaped devices that appear to be made of an unknown metal. They are seen sparingly in some areas and numerously in others. Some are half-buried in the ground of an open field and others have crashed into buildings and homes, causing considerable damage in their wake.

The capsules are motionless devices and a large mystery in the beginning. It is unknown why they emit mysterious noises, though it may be the result of gas still being released.

Partway through the game the player comes across what appears to be a large warehouse that stores the capsules when passing the vicinity of The First Visitation.

During gameplay, it is shown that the capsules fell from the sky, seemingly without warning. According to one old character in the game, It was only after the capsules fell that the First Visitation began. The old man claims that the chemicals the capsules emit have different effects on different people. But even he doesn't know what they are, where they come from, or why they were deployed.

There are two kinds of people in the game scene, human and the turned. If one watches closely, they will find that that normal humans have red eyes, while the turned black beings have white eyes. Continue playing, and you will notice that several "humans" have white eyes. Apparently they are not turned, so what happened to them?

Late in the game another character reveals the capsules contain some kind of medication. It appears people were selected to be exposed to the 'medicinal' gas in order to see its varying effects on people with varying personalities and aptitudes. The test was successful, despite the fact that most people that breathed the gases the capsules emitted were turned to Zombies. The people that breathed the gases but didn't turn to Zombies seem to have elevated speed, intelligence, and strength. The character considers that these capsules were designed to jumpstart some form of advanced human evolution.

When the player reaches the final stage of the game they will learn of what actually happened during the Visitations.