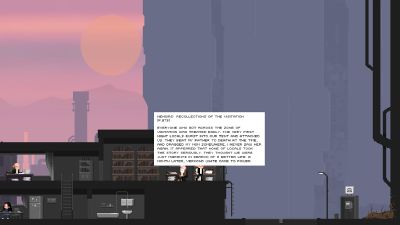 The only first-hand text about the First Visitation in game.

The First Visitation is a significant event in the world of The Final Station.

Based on newspaper clippings regarding that the Second Visitation is happening on the 134th anniversary of Arkady Strugatsky's birthday, the event likely took place roughly around 1953 measured by our timeline.

What is known about the First Visitation has been culled from highly suspect official government reports, and the reports of those few who survived within the visitation border. The only first-hand material of the First Visitation during the game play is the note of Memoirs: Recollections of the Visitation (P.273) and the character (an old man who has one red eye and one white eye) who collect them.

Summarize all the information, we can know that the event came out of outer space - after a UFO crashed in the canyons of western mountains, some kind of alien forces or invaders landed, defeated regular armies and caused a dead zone. Large Capsules also appeared across the western country, spraying out an unknown gas, which infected those who came into contact with it, causing a condition where inky black liquid leaked out of their orifices, and attacking anything that moved and was not infected like them. These incidents caused chaos across several embattled countries, with political and social collapse ensued.

After the initial shock, many people whose countries had been destroyed during the attack, had crossed the zone of Visitation, trying to escape from the disaster. These refugees were treated badly by the unaffected locals, who thought they were just migrants in search of a better life during the chaos period, and categorized them as "Settlers". From then on, the groups who have an origin of destroyed countries were being discriminated and persecuted, till the Second Visitation.

Subsequently, the unaffected human settlements, whether cities, villages or states, all banded together under a unitized Council and a President, then began to eradicate the infected as best they could. Human settlements remained sparse after the apparent "victory" after the First Visitation, most of which were small cities built up around trading posts, pioneer settlements, and military or scientific facilities.

These scattered cities/countries constituted the new country, the representatives or rulers of these cities formed the Council, governing the whole post-Visitation country. Vermond White from the city of Redmund became the 1st President of the new country. White ordered the building of new capital, Metropole, and a railway system to connect all the cities composed the country, which lead by the Upper House of Metropole. 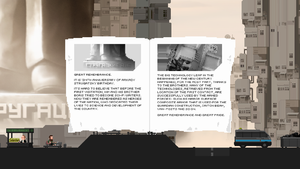 A newspaper in game, describes the contribution of Strugatsky brothers right after the First Visitation.

Fearing a Second Visitation, the confederate government under President Vermond White created the Guardian Program, a program to create a bipedal armored unit capable of destroying any invading forces. The Council members initially argued as to who should have central control over the system (as they were autonomous cities), until it was finally decided that a central thinking unit would be created independent of any city's influence. But this move angered many citizens who felt the bickering over the construction of the Guardian wasted valuable time - and still others who thought the program was a waste of funding and time in the first place.

The visitation made traditional travel untenable, with most roads abandoned and air travel too fundamentally expensive, rails became a predominant method of travel between cities. Within cities, where roads were in better condition, car and bus travel are still popular, but limited due to fuel shortages. The whole country depends on these tracks, and thus, most settlements are directly connected to a track.