"Don't worry, you can't escape this."

Arthur Vane, commonly known as The Hunter, is a character in The Final Station and its DLC The Only Traitor. He is introduced near the end of the game, first met in the Lost Connection level. He will start talking to the player when approached and will go to the train as a passenger.

The Hunter wears a fedora hat, carries a shotgun and is always smoking. A distinctive characteristic is his white eyes, hinting that he is too infected, but the infection had a different result. He appears to know that the train's engine is made of Capsules technology. He also appears to either being able to appear towards people using a hive mind ability of the infected, interact with people of great importance. He suggests that the infection is not a virus, but a medicine "too powerful for some people". 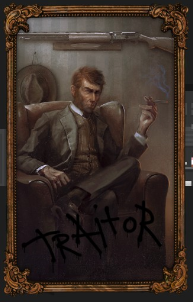 The player first meets him in the Lost Connection level, in a room full of dead zombies. He possesses the Hunter's Blocker Code and will begin to talk if approached. In the train, the Hunter tells the player that they managed to keep the infection away due to the radiation from the train engine, but they will turn soon too, and the Hunter will either meet them in the new world, or... the second option is always available.

The train breaks and the player must proceed on foot back home, getting infected by the gas coming from a Capsule. The Hunter appears ahead, arriving before the player. When met in Redmund the Hunter says the player is nearly there and that he "won't spoil the surprise". Arriving home, the player starts to transform into a zombie after leaving the daughter's room, and entering the hallway. The Hunter emerges from the kitchen, finishes his cigar, and loads his shotgun. He points at the now-zombified player's head and tells him that he'll "take care of her". He then proceeds to shoot the player.

In The Only Traitor DLC it is revealed that he is one of the original founders and is a traitor to the Council's cause. He disappeared from the public view when Vermond White was overthrown. Arthur is seen working with Armand White to turn people into the Reborn. In a conversation with the Blacksmith, he denies being responsible for Vermond White's death. He later tasks Peter Gleen with killing the train conductor in exchange for his survival, claiming he can't act directly.

The player can see the man, who is the Hunter in the very first level, the nightmare in the lower left part of the map. Smoking and holding a shotgun, surrounded by dead zombies, in a room that appears to be something like a prison cell block. But the player can't reach him and talk with him, seeing him is an omen of things to come.

In "The Only Traitor" DLC, there are four paintings of the Council, but one of the paintings is missing. It is later found in the room next to Adam Thornton's office, before encountering the Hunter. The nameplate has been removed and TRAITOR has been scrawled across the painting. The picture depicts a bearded man, with a shotgun hanging above him, and strongly suggests this is Arthur Vane.

He may also be the first reborn human from the First Visitation, granting him paranormal abilities.

Arthur's intentions are vague, ominous, and lean towards ushering in the 'inevitable' to transform humans into an advanced race. Hence being labeled as a traitor among the original founders for carrying out his newly found revelation.

The DLC title, "The Only Traitor" may be referring to him.

It is speculated he may be behind creation of The Order of The Advent. 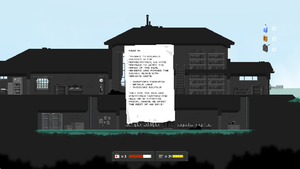