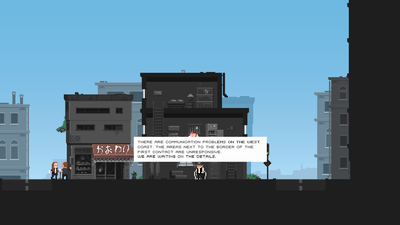 This TV broadcast marks the beginning of the Second Visitation.

The Second Visitation is a significant plot event in the world of The Final Station.

Following the devastation resulting from the First Visitation, the confederate government of the nation grew increasingly paranoid concerning the return of whatever threat caused it, and a name was given to this idea, the Second Visitation.

The player's dream at the beginning of the game is an omen of the Second Visitation.

The Second Visitation occurs shortly after the start of the game. When player arrives at the city of Nimlard, a television will report that the western part of the country just lost contact, after that the player will encounter more evidence about the event. Based on newspaper clippings regarding the 134th anniversary of Arkady Strugatsky's birthday, the event likely takes place roughly around 2059 measured by our timeline.

During the Second Visitation, the government sent troops to engage the invaders, but this plan failed, and lead to the unsuccessful use of nuclear weaponry. Capsules soon began to appear across the country, spewing gas in the air, infecting people and turning them into Zombies. However, not everyone in the First Visitation turned into a Zombie, rather, they became further evolved humans. It appears that humans who resist transformation seem to have elevated immune systems, intelligence, and strength.

What this new transformation means for the country, its current situation, and humanity as a whole is unknown. But it seems like a countermeasure, the Guardian, has been developed in order to defend against, or resolve the Second Visitation, and save humanity at large. That's what you, the conductor, are facing.