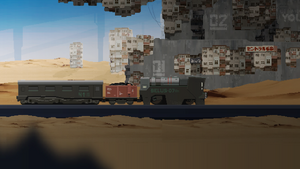 The train is the heart of The Final Station and your mobile home.

The train is a Belus prototype locomotive that was constructed at Rail Factory E5K. It's the only operational prototype, and consequentially is plagued by frequent malfunctions. The shock absorbers, ventilation system, and any attached cargo shipments must be monitored for faults, lest the train overheat and cease functioning altogether. The train includes a food and medkit dispenser, a computer, and crafting bench.

The Belus locomotive line consists of a fleet of 8 prototype trains. Unfortunately, they constantly break down due to lack of funding going toward the project. This is thanks to the "Guardian" requiring their head engineer, The Blacksmith. In his absence, the Belus trains cannot be mass produced, forcing the team to go into bankruptcy and discontinue the maintenance and production of locomotives.

The trains have a wheel arrangement of 2-2-0. They are powered by a prototype electrum reactor and diesel engine combination. It's also known that the material the train is made from is similar to the material the Capsules in the first visitation were comprised of. The passenger car is seen to be reinforced with same material, and holds 6 passengers. The circuit breaker and air purifier control panels are also found there.